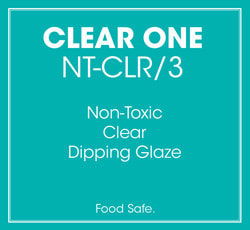 NT-CLR balances the production needs of high volume ceramic studios with superior fired performance. NT-CLR dries quickly but stays open long enough to allow for drips and runs to be smoothed away with a fan brush. Higher levels of suspension agents slow down the glaze’s tendency to settle, which means you’ll need to remix less frequently. A lower coefficient of expansion (COE) improves NT-CLR’s ability to withstand thermal shock and minimize crazing.

This glaze will fire to a smooth, crystal clear finish and has been lab tested to be compatible with leading color glaze lines. The bluish-green dye helps identify where glaze has been applied and guard against over application.

Comes in a 3-gallon pail.

Available for in-store pickup only.

Dipping glazes differ from brushing versions as they contain fewer organic additives, making the dipping glazes less viscous than brushing formulas. Dipping glazes allow for quick and efficient glazing on large pieces or a large number of pieces. The amount of glaze deposited on bisque is primarily a function of glaze viscosity and the amount of time the bisque is left in the glaze – careful attention to these two details are critical to obtaining satisfactory results.

All Mayco Dipping Clear glazes are AP Non-Toxic, Food Safe and Dinnerware Safe, when used according to manufacturer’s directions.

Sold out
Add to Cart