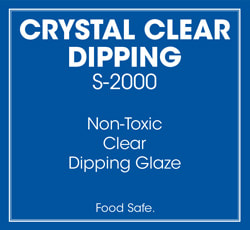 S-2000 offers the same clarity as NT-CLR but contains fewer additives and is therefore thinner than NT-CLR. This glaze has a higher coefficient of expansion (higher thermal expansion) and is more tolerant of high expansion bodies. S-2000 contains a blue dye to help you see where the glaze was applied.

The fundamental performance difference between our two clear glazes is in their rates of expansion: NT-CLR has a lower rate of expansion, S-2000 a higher rate. As you gain experience with specific clays or bisque bodies and monitor firing results you’ll understand which clear glaze is right for you.

Comes in a gallon jug or 3-gallon pail.

Available for in-store pickup only.

Dipping glazes differ from brushing versions as they contain fewer organic additives, making the dipping glazes less viscous than brushing formulas. Dipping glazes allow for quick and efficient glazing on large pieces or a large number of pieces. The amount of glaze deposited on bisque is primarily a function of glaze viscosity and the amount of time the bisque is left in the glaze – careful attention to these two details are critical to obtaining satisfactory results.

All Mayco Dipping Clear glazes are AP Non-Toxic, Food Safe and Dinnerware Safe, when used according to manufacturer’s directions.